Lumina is a six part musical suite written for low whistles, tracing the journey of the spirit from birth death and re-birth.

Lumina is a six part musical suite written for low whistles, tracing the journey of the spirit from birth death and re-birth.
The music was envoked and inspired by the six magnificent Harry Clarke stained-glass windows in Diseart Chapel, Dingle, Co Kerry, Ireland

June 2004 saw the release of his third CD Lumina a six-part suite written for low whistles tracing the journey of the spirit from birth to death and rebirth. The music was evoked and inspired by the six magnificent Harry Clarke stained-glass windows in Díseart Chapel, Dingle, County Kerry.

Harry Clarke is widely recognised as one of the greatest stained glass artists of all time. Despite his untimely death in 1931 at the young age of 42, he left us a legacy of stunning art works in his windows around the world. In 1922 the Presentation Sisters commissioned the Díseart collection for their convent chapel in Dingle for the princely sum of 1,000 pounds. Clarke installed a series of six twin-light windows that have been described as “breathtaking”, “magnificent” and “intensely moving”. They vividly illustrate Clarke’s unique style, with lively animated faces, a profusion of rich vibrant colours and generous ornamentation. The National Gallery of Ireland recently took possession of Harry Clarke’s notebooks and drawings.

Two disciplines come together in Eoin Duignan’s latest recording Lumina, as the work of Harry Clarke is illuminated with a new light in these beautiful and moving compositions. Influenced from an early age by master pipers Seamus Ennis and Leo Rowesome, much of Eoin’s inspiration has come from the rich traditions of Irish history and folklore as well as his own life and experiences. On Lumina, Eoin is joined by some of Ireland’s finest musicians including producer Gerry O’Beirne, Máire Breathnach and Liam Ó Maonlaoí. The six part suite gathers together these acclaimed musicians on a collection of original compositions and brings the listener on a colourful and illuminating journey through life; through sadness and laughter; pain and joy; and shows us that:
“in the midst of the trials of life we get as it were a taste of heaven” 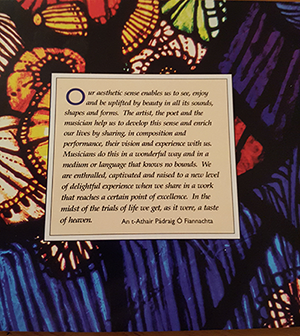 The project has been a slow organic process and i would like to thank my family and close friends who encouraged me along the way, my sponsors and friends and most of all you, both listeners and dancers.

Special thanks to Diseart, (Dingle Institute of Education and Celtic Culture) (http://www.diseart.ie) which is home to the Harry Clarke windows and welcomes visitors to view these national treasures.

A very special thanks to the wonderful musicians who gave of their talents with generosity, understanding and sensitivity for the project.